An appeal to the international community and foreign missions to stand up against the violation of human rights, segregation and discrimination of the Montenegrin people;

to stand up in the defense of peace and inter-religious harmony in Montenegro.

Recent events in Cetinje, the historical capital of Montenegro, paint a clear picture of how this occupation is advancing: Cetinje is a symbol of national identity and pride to the Montenegrin people. It is a historic stronghold that provided resistance to foreign invaders without ever accepting defeat. It also served as an ally of western forces who fought for freedom and against totalitarian, fascist, fundamentalist and retrograde regimes throughout the 20th century.

Cetinje hosts the sacrilegious objects most sacred to Montenegrins, including the Cetinje Monastery, the remains of the Saint Peter of Cetinje, the resting place of Prince Danilo, Metropolitan Danilo and Metropolitan Mitrofan Ban. In addition, some of the most holy objects of all Christendom are kept there, including the hand of Saint John the Baptist and the Byzantine Icon of Our Lady of Philermos. For this reason, it is a centuries old tradition of all Montenegrin people to gather in Cetinje to celebrate Christmas Eve.

And how do Montenegrins celebrate Christmas today? Gathered in the square, under the sky, surrounded by cordons of police guarding the tenants of the Cetinje Monastery.

In the past 30 years the people of Montenegro, havesuffered the most egregious violations of their religious freedoms and the rule of law through the usurpation of the Cetinje Monastery by the Serbian Orthodox Church, thus leaving the people of Montenegro unable to attend their most sacred place of worship. This year, the situation has been further aggravated.

All Entrances to Cetinje Monastery Barricaded

Who do the police protect from the Montenegrin people? Who are the tenants of the Cetinje monastery who curse and insult the people of Cetinje, Montenegrins?

Concealed inside the monastery by police commanded by the current occupiers of the government are illegal occupants: the clerics of the Serbian Orthodox church. The same clerics who “curse and cast spells of damnation” on the very citizens of the city they inhabit. The same clerics who deny the very existence of Montenegrins by referring to us as “breakaway Serbs”.  The same clerics who blessed the grenades dropped on Dubrovnik a mere thirty years ago. The same clerics who encouraged and propelled Serbian nationalists to commit genocide in Srebrenica. The same clerics who endorsed numerous atrocities that befell Bosnia. The same clerics who gathered with Karadžić and Mladić in Pale to celebrate the destruction of Sarajevo and the perishing of tens of thousands of its children. The same clerics who once bowed to Arkan, infamous war criminal used by Serbian Intelligence to murder its political opponents and lead the paramilitary which committed war crimes in the 1990s. The same group of clergy who once hosted Šešelj, mastermind of the genocidal project of “Greater Serbia”.  The same ministers who posed for photographs embracing guns and riding tanks during the Balkan civil war.

These clerics, these endorsers of civil strife, are afforded by the occupying government “protection” from the Montenegrin citizens who atone for their sins of the past by hosting peace rallies chanting “Oprosti nam Dubrovniče” (“Dubrovnik Please Forgive Us”). These ministers, these supplanters of Cetinje Monastery, are allowed by the occupiers to bar citizens entry to the monastery which lawfully belongs to the people of Montenegro. These are acts of treason.

What is the True Character of the Serbian Orthodox Church?

The dignitaries of other Orthodox churches describe the Serbian Orthodox Church as sectarians and dangerous cult within Orthodoxy because it inherits Svetosavlye, clerical nationalistic doctrine, whose phrase is “one people, one religion and one state”. So, Svetosavlje is a recognizable name for this militant, theocratic and fundamentalist cult within Orthodoxy. Due to its ethnic radicalism, this same Svetosavlje is condemned by other people in the Orthodox world.

**Svetosavlje, or “A Way of St. Sava” is a doctrine within the Serbian Orthodox Church focused around a cult of the 13th century Serbian saint, St. Sava. It is an ultra-nationalist faction of the Serbian Orthodox Church concentrated primarily on strengthening the Serbian national movement, including openly supporting the ambition of extending Serbia beyond its current borders. It is this goal which led directly to the bloody wars of the 1990’s in the Balkans.

Just look back at the history of the last 70 years – which Orthodox Church in Europe has participated so actively in various war campaigns and almost all political events as the Serbian Orthodox Church? From crimes in the service of Hitler during the WWII, to crimes in the 90’s civil war in Croatia and Bosnia and Herzegovina.

What other Orthodox church in the world has so many pedophiles and various other debauchers and criminals? Even in Great Britain, the Serbian Church became notorious due to pedophile scandals in the dioceses of this church in the Kingdom. But that’s a different story. Let’s return to the sinister influence of this cult in our homeland.

For thirty years the clergy of an occupier foreign Church have been disguising their sinister political intentions behind the curtain of a ‘divine mandate’ and rules of hierarchy within the wider Orthodox Church. By doing so they are directly attacking the freedom-loving, ethical and inclusive will of the Montenegrin people and our constitution. Montenegro has had to resist many attacks from both Serbian and Russian controlled media. These countries spare neither financial support nor diplomatic effort in order to undermine Montenegro’s integration within European and Euro-Atlantic political and security structures.

The Principal Instrument of Serbia and Russia

The principal instrument of Serbia and Russia for achieving their goals in Montenegro is indeed the Serbian Orthodox Church in Montenegro.  They nearly succeeded in those efforts in 2016 when they attempted a coup d’etat in Montenegro. Fortunately, this attempt to destabilize the only country in the Balkans that has successfully preserved peace in a multi-ethnic society since the break-up of former Yugoslavia, failed. However, some of those accused, and formally indicted for attempted coup are now part of the ruling majority in Montenegro. In addition, all the constituents of the new ruling majority in Montenegro have, as a common denominator, the external support of Serbia and Russia and the internal support of the Serbian Orthodox Church to derail the pro-Western trajectory of Montenegro. This includes the Prime Minister and all ministers of the new Government.

From being a regional leader in EU integration and an established Western ally as a NATO member, Montenegro has turned into a dominion of Russian interests in the Balkans, and a polygon for exercising Serbian enlargement ambitions in the region. This, disappointingly, seems to have a silent endorsement from some Western political addresses as well.

Serbian Church Refuses to Adhere to the Rule of Law

Adoption and implementation of the Law on Religious Freedom that the previous government administration brought in, was supposed to provide a legal framework for containing the powers of the the Serbian Orthodox Church (‘The cult of Svetosavlje’) and limiting their destructive political interference in Montenegro. Also, this Law was supposed to finally regulate the property status of the temples that the Serbian Orthodox Church occupied a long time ago, and to enable all religious Orthodox organizations, its believers and clergy, regardless of nationality, to participate in worship.  However, the Serbian Orthodox Church, with the support of political and intelligence structures of Serbia and Russia, participated in the election campaign by openly interfering in the internal affairs of our country, frightening superstitious people with terrible curses, cursing them and their children if they vote for the previous government.  These lies swayed enough superstitious voters in favor of the political parties openly influenced by the Serbian Orthodox Church to afford them a minimal parliamentary majority.

As a consequence of this manipulation of the facts, immediately upon forming a new government, and under the influence of the Serbian Orthodox Church,  the new parliament attempted to change the Law on the Religious Freedoms adopted a year ago, effectively restricting access to sacral buildings to worshippers of Montenegrin nationality. Furthermore, because the Serbian Orthodox Church has been assisted in this pursuit by Serbian and Russian structures, this action compromises even the sovereignty of Montenegro.

And so, on Christmas Eve, we have had worshippers of Montenegrin nationality illegally barred from practicing their faith at the Cetinje Monastery through government ordered barricades and armed police vehicles! We implore you to consider this blockade of Montenegrins on the outside carefully alongside the behavior of supposed Christian ministers inside the ramparts, where the Serbian Orthodox Church held an official liturgy for a dozen people of Serbian nationality right in front of the Monastery.

This banishment amounts to de-facto segregation and discrimination of the population of Montenegro and violates the aforementioned principles of democracy, civility, individual rights and freedoms, equality, and diversity that the constitution of Montenegro, and indeed Europe itself mandates. Therefore, the sitting government of Montenegro, through their compliance with this exclusion, is in violation of the rule of law and has cast off the majority of the population as second class citizens.

We Refuse to Be Second Class Citizens!

All Montenegrins feel as defeated and humiliated as the banned worshippers. We are currently working to shield our children from this blatant fascism, and to resolve this issue now, so that subsequent generations will not face it in the future. We feel dispelled by a parliament who rose to power through deception and manipulation, and are espousing retrograde values which the citizens of this country, along with our international partners, have worked for decades to fight against: criminality, chauvinism, destruction, primitivism, and war.

On behalf of all citizens of Montenegro, we will continue to oppose the occupier with dignity despite their attempts to provoke, harass, resurrect old divisions and traumas, and discredit us, just as our ancestors have done. Ancestors, who through super-human effort erected and protected the Monastery and Cetinje itself from various occupiers throughout Montenegrin history. We must, because it is simply unacceptable that there is any barricade in the city of Cetinje! It is unconscionable that the government provides means to prohibit citizens from entering a public place. There can not be railing against the Montenegrins in the Montenegrin capital!

Revered Sirs and Madams, you are witnessing an occupation in the heart of Europe! Consider the facts as we have laid them out and make no mistake: the civil liberties of Montenegrins are being curtailed by a government influenced by the religious body of a foreign entity. We would like to remind you that Montenegrins, through declaration of their independence in 2006 have weakened Milošević’s regime, and in doing so have chosen a pro-EU path and membership in NATO. Montenegrins are European allies and comrades! Please do not overlook this critical moment for Montenegro and Europe! Do not allow history to repeat itself. Do not allow the devolution into civil conflict so familiar in the Balkans because you chose to turn a blind eye to signaling actions that are reminiscent of  the “Greater Serbia” project of the past.

Therefore, in accordance with international standards and laws, we submit this letter to beseech you to recognize the peril that the country of Montenegro is in. May this serve as a plea to the entire international community to actively participate in finding a way towards an end to the crisis that has befallen Montenegro.

In closing, we refer you to the actions of your predecessors, diplomats of the previous generation who, always welcome in Cetinje, demonstrated respect, friendship, and support of Montenegro and its citizens. We invite you to follow in their righteous footsteps and compel the removal of the aforementioned literal and figurative barricades to a democratic nation of Montenegro and future European Union partner. We call on you to say no to barricades! 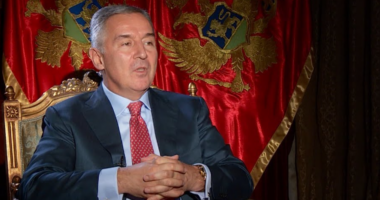 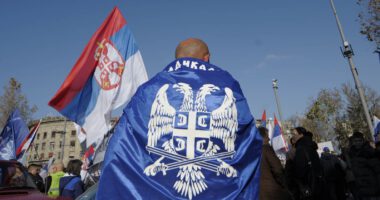 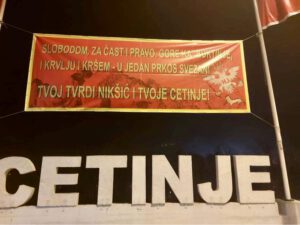